Because the DjangoCon hotel is very close to the Rio Vista Trolley stop, I thought I would give some suggestions for food, starting with those that are reasonably easy to get to on the trolley. After 7 or 8 PM, the trolley runs only once per half hour, so you may end up wanting to use Lyft to get back if you used the trolley to get to your destination. Sigh… San Diego has a long way to go for good mass transit.

This got kind of out of control as I keep adding to it based on places I love and what others have told me. Hope you enjoy your visit to San Diego!

One stop East from the Rio Vista stop on the Trolley, at the Fenton Parkway stop; in the Fenton Marketplace:

And of course, a Starbuck’s Coffee

IHOP: International House of Pancakes. 🍴 🍳 Breakfast all day, and American Diner fare. PurpleDiane says I would rather eat at Broken Yolk (see below), but this place is much more convenient if you have no car, and I haven’t eaten at IHOP in 10+ years, so really, what do I know?

Bit more of a walk up Fenton Parkway:

Primo’s Mexican Food and Bar. 🌮 🌶 A variety of Mexican food. Menu shows breakfast food available all day, though they open at 10. Yelp says Taco Tuesday is $10 All you can eat, but I can’t find it on the website, so call them first.

One stop West of the Rio Vista stop on the Trolley at the Mission Valley Center Station:

Very close to the trolley stop:

Easy walk in the parking lot:

More of a walk across the street is Mission Valley Center shopping mall:

Even more of a walk through the mall and parking lot to get to The Broken Yolk 🍳 (great breakfast/lunch only) and In-N-Out Burger 🍔 🍟 (West coast’s quintessential burger shop).

Bit of a walk at the other end of Fashion Valley’s parking lot: P.F. Chiang’s. 🍜 Family-friendly chain offering creative takes on Chinese fare in a striking space. PurpleDiane says Take a car/Lyft to some of the Chinese restaurants listed below.
Edited: I have to admit I hadn’t eaten at P.F. Chang’s in a very long time, and I was not impressed at that time. Some friends who are fans were unhappy that I implied the food wasn’t good and took me to dinner there. While the other Chinese places I list below are more authentic, I have to admit that the food there now is very very good, so don’t reject it on my behalf!

San Diego’s Old Town is 5 stops west from the Rio Vista trolley stop. This is the old historic district; largely a “tourist trap”, however, it’s still a fun place to visit.

Fiesta De Reyes and Casa De Reyes 🌮 🌶 🌯 Great Mexican food, often with live music. Fiesta is outside on the patio, Casa is inside. PurpleDiane has always enjoyed eating at both places.

El Agave 🌶 🍸 In Old Town area, but not close to trolley. Not just typical Mexican food, this place has a Tequila Museum and more than 2000 varieties of tequila. PurpleDiane enjoyed the food and margaritas.

Rockin’ Baja Lobster Cantina 🦀 🌮 🌶 In Old Town area, but not close to trolley. Very fun, upbeat place. Might be kind of loud, depending on which room you are in. PurpleDiane had a fun time there.

Eclipse Chocolate 🍫 ☕️ In South Park. Delicious food and lots of chocolate options. PurpleDiane says Super Yum! If you love chocolate, you’ll love this place! (Thanks to @hayleydenb for the reminder, I don’t know how I forgot to add it.)

Some of the best Chinese food is in the Kearney Mesa area. PurpleDiane recommends the first 3 places for dinner or Dim Sum (Dim Sum is lunch only):

Emerald Seafood Chinese 🏮 🐟 🍚 PurpleDiane has been going here for many years. Great dim sum, roast duck and (of course) seafood.

China Max 🏮 🐟 🍚 Has dim sum, but the restaurant is small so no carts, you order from the menu. Great food though.

Other Chinese/Asian restaurants in Kearney Mesa:

Kura Revolving Sushi Bar 🐟 🍣 This place is very fun, but there is usually a long line, so put your name on their list online. PurpleDiane says Some of the best sushi around!

Tasty Noodle House 🍜 Lots of choices of noodle dishes and other Chinese food.

Other parts of town

Top of the Market ⛵️ 🍗 🍴 On the harbor with spectacular views, wonderful seafood. More expensive than most, but food, location and service are tops. It’s next to the USS Midway aircraft carrier and the excellent Maritime Museum. PurpleDiane says Go for the Happy Hour 3 - 6 PM

Here is a Twitter thread from Trey Hunner about Mexican food and Donuts. (Carne Asada is grilled marinated steak.) 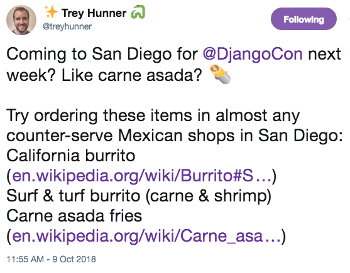 It’s pretty hard to find bad Mexican food in San Diego, though I’m sure it exists. I like to think of Carne Asada Fries as a Mexican version of Poutine. 😃 😄 😂

Also, my friend Anna wrote a blog post about what she likes about San Diego. I’m not sure I agree with her comment that we have a “decent public transit system” - I don’t think it’s very good at all, but I live in the ‘burbs where it’s pretty much impossible to live without a car.

If you do get a trolley pass, it is also good on the bus system. You can buy the pass from the machine at the trolley stop. First time is $7, but $2 is for the Compass card, so you can reload the card for $5 per day. Theoretically they have multi-day passes at a savings, but I don’t know if you can buy them from the machines at the trolley stop. I will try to find out and update this post. I just discovered they have an app, but I have no experience with it.